What We Have Left 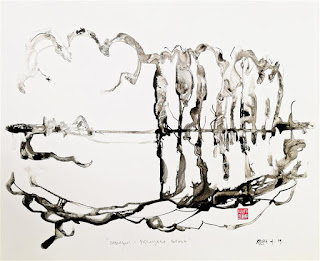 Some time ago I wrote a series of short stories. Here is one of them. They will be published as a book, once they are edited. That should be some time before 2030.

If you would prefer to listen to the story (and I recommend that you do) you can hear me reading a slightly older version of it on my Soundcloud.

Here is What We Have Left:

And the forest, that never had been there before the night before, was all at once that morning there.

And they emerged, eleven women, eleven men, and Ash, and dropped sap from their tunics.

And once they had assembled on The Rock, they turned to face the North.

And then they journeyed North, until they reached the northernmost encampment, deep within the fir Trees. And the People of the first camp called themselves Norgn.

And they returned South, and East until they reached the easternmost encampment, shuttered in the birch Trees. And the People of the second camp called themselves Danae.

And they returned West, and South until they reached the southernmost encampment, nestled in the walnut Trees. And the People of the third camp called themselves Frenc.

And they returned North, and West until they reached the westernmost encampment, veiled in the oak Trees. And the People of the fourth camp called themselves Engl.

And they returned East, back to the Centre, until they found their own fresh stand of ash Trees. And the People of the final camp called themselves Corbn.

And each leader led a Hound which did the bidding of the People of that camp. And each Hound led the Procession of its People to the Centre.

And the leader of the Norgn, naméd Bran, led a huge grey shaggy Hound, hung with green fruticose fur.

And the leader of the Danae, naméd Rus, led a brindle Hound, shimmering with brown foliose seams.

And the leader of the Frenc, naméd Gau, led a white Hound pitted with spots of black squamulose mane.

And the leader of the Engl, naméd Jud, led a pink Hound raised up with yellow crustose skin.

And the leader of the Corbn, naméd Crow, led a Hound blacker than the Well which birthed the Earth.

And the leaders led their Hounds and they all went straight to Ash. And Ash, and Ash's People, told them what to do.

Eleven women circled anticlockwise; eleven men went counterwise to them; and at the Centre, at the World Rock, Ash stood and surveyed the rings of ash Trees. From deep beneath the roots they dug out Minerals, and forged them into one almighty Stone. Ash split the Stone and one side was all smooth blue-petrol opalescent Rock; the other veins of slate-black Crystal, jagged and opaque. Each half Ash split again, and once again.

Ash held up the four smooth, petrol-blue Stones: "these are all parts of Hreða, Goddess of Life and War, Spring's bringer of Fecundity".

Bran stepped up, then Rus, then Gau, then Jud. Each took in turn a piece of the blue life-rock. But when dark Crow hopped forward there was nothing left but grains of sand. "And these, Crow, are for you; and you shall know what to do".

Ash held up the four rough slate-black Stones: "these are all parts of Pĭða, Rheða's shadow, God of death and Peace, Autumn's spreader of Morbidity".

Jud stepped up, then Gau, then Rus, then Bran. Each took in turn a piece of the grey death-Stone. But when bright Crow came goose-stepping up, all that remained was the Dust of Earth. "And this, Crow, you must know, is all for you".

And Crow help up the sand and Dust and worshipped it. And the People stopped and laughed, and then they shunned Crow. And it was then that something changed.

Eleven and eleven stopped and pointed. The sky grew dark. The earth rose up. The wildlife turned to silence. From North and West there came the sound of distant deluge.

The Norgn fled north; the Danae east; the Frenc and Engl south and west. Dropped everything and fled: they dropped every thing. Each fled back beyond their camp and did not stop. Each fled out until they reached some higher ground.

Above the Ocean, motionless, a huge black Bird, its wings the hue of petrol and of slate. Hanging, like a Stone within the Sky. Until the Water grew by degrees settled. And Crow took one last look, and circled out, away from Dogger Bank, spinning off to find some Branch to land.

I played Dungeons & Dragons as a kid. A lot. I still remember the excitement of opening that D&D Basic set in 1980, when I... 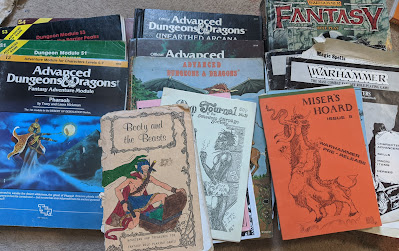